HARRISBURG – Whether hiking in the woods, driving through the countryside or simply enjoying nature in your backyard, Pennsylvania Game Commission officials encourage outdoor enthusiasts to leave wildlife alone, and in the wild, especially young of the year.

“Being outdoors in the spring is an enjoyable way to spend time and learn more about nature,” said Calvin W. DuBrock, Game Commission Bureau of Wildlife Management director. “In the coming months, it will become common to find young deer, rabbits, birds, raccoons or other wildlife, some of which may appear to be abandoned. Rest assured that in most cases, the young animal is not an orphan or abandoned and the best thing you can do is to leave it alone.”

DuBrock noted adult animals often leave their young while the adults forage for food. Also, wildlife often relies on a natural defensive tactic called the “hider strategy,” where young animals will remain motionless and “hide” in surrounding cover while adults draw the attention of potential predators or other intruders away from their young. 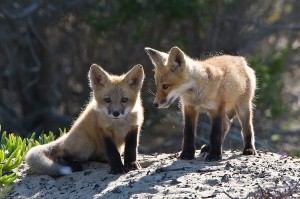 “While it may appear as if the adults are abandoning their young, in reality, this is just the animal using its natural instincts to protect its young,” DuBrock said. “Nature also protects young animals with camouflaging color to avoid being detected by predators.

“Wild animals are not meant to be pets, and we must all resist our well-meaning and well-intentioned urge to want to care for wildlife. Taking wildlife from its natural settings and into your home may expose or transmit wildlife diseases to people or domestic animals. Wildlife also may carry parasites – such as fleas, ticks or lice – that you wouldn’t want infesting you, your family, your home or your pets.”

DuBrock noted that, each year, people ignore this advice by taking wildlife into their homes and then are urged to undergo treatment for possible exposure to various wildlife-borne diseases, such as rabies.

“Habituating wildlife to humans is a serious concern, because if wildlife loses its natural fear of humans it can pose a public safety risk,” Palmer said. “For example, a few years ago, a yearling, six-point buck attacked and severely injured two people. Our investigation revealed that a neighboring family had illegally taken the deer into their home and fed it as a fawn. This family continued to feed the deer right up until the time of the attack.

“This particular incident was the subject of numerous news stories around the state, and serves as a fitting example of the possible consequences that can stem from feeding or simply getting too close to wildlife.”

In addition, Palmer noted that it is illegal to take or possess wildlife from the wild. Under state law, the penalty for such a violation is a fine of up to $1,500 per animal.

“Under no circumstances will anyone who illegally takes wildlife into captivity be allowed to keep that animal,” Palmer said. “While residents love to view wildlife and are very compassionate, they must enjoy wildlife from a distance and allow nature to run its course.”

Palmer also pointed out that, under a working agreement with state health officials, any “high risk” rabies vector species confiscated after human contact must be euthanized and tested; it cannot be returned to the wild. Though any mammal may carry rabies, species identified in the agreement are: skunks, raccoons, foxes, bats, coyotes and groundhogs.

“Except for some species of bats, populations of all other rabies vector species are thriving,” Palmer said. “Therefore, to protect public health and safety, it only makes sense to put down an animal for testing, rather than risk relocating a potentially rabid animal, and to answer the question of whether any people were exposed to the rabies virus.”

DuBrock said it is always wise to avoid wild animals and even strange domestic pets because of the potential rabies risk.

“Animals infected with rabies may not show obvious symptoms, but still may be able to transmit the disease,” DuBrock.

People can get rabies from the saliva of a rabid animal if they are bitten or scratched, or if the saliva gets into the person’s eyes, mouth or a fresh wound. The last human rabies fatality in Pennsylvania was a 12 year old Lycoming County boy who died in 1984.

If you are unable to identify a wildlife rehabilitator in your area, contact the Game Commission region office that serves the county in which the animal is found so that you can be referred to the appropriate licensed wildlife rehabilitator. Region office contact information can be found on the agency’s website (www.pgc.state.pa.us) by putting your cursor over “ABOUT US” in the menu bar in the banner at the top of the homepage, and then clicking on “Region Information” in the drop-down menu listing.